The Irish-Serbian Chamber of Commerce (ISCC) is organising a series of seminars,  “Doing Business in Serbia – Key Aspects for Irish Companies”.  It is envisaged that in six modules (two per set) panels of experts will cover key aspects on the following topics:
First set, December 10:
• Key economic indicators of Serbia, Dane Atanasković; • Incorporation in Serbia, Ksenija Sorajić on behalf of KSEL;
Second set, December 13:
• Doing business in Serbia, Christoph Berndt; • Available incentives and competitive environment, Aleksandra Popović Kojić on behalf of RAS;
Third set, December 15:
• Key aspects of trade agreements of Serbia, Marko Mandić on behalf of the CCIS; • Competitive advantages of Serbia, Des Anderson of LearnUpon.
We invite you to REGISTER – full details will be emailed to you including Zoom addresses for the seminars. This online event is co-financed by the Directorate for Cooperation with the Diaspora and Serbs in the Region, of the Ministry of Foreign Affairs of the Republic of Serbia.

Registration for the seminar

Launch of the Irish-Serbian Chamber of Commerce

With the presence of almost a hundred participants in an extremely affirmative atmosphere, the launch of the Irish-Serbian Chamber of Commerce, headed by Frank Hannigan, was made official, at the webinar held on 26 May 2021. The keynote speakers were H.E. Aleksandra Joksimović, Ambassador of the Republic of Serbia to Ireland on a non-residential basis, and H.E. Simon Coveney, Minister for Foreign Affairs of Ireland. 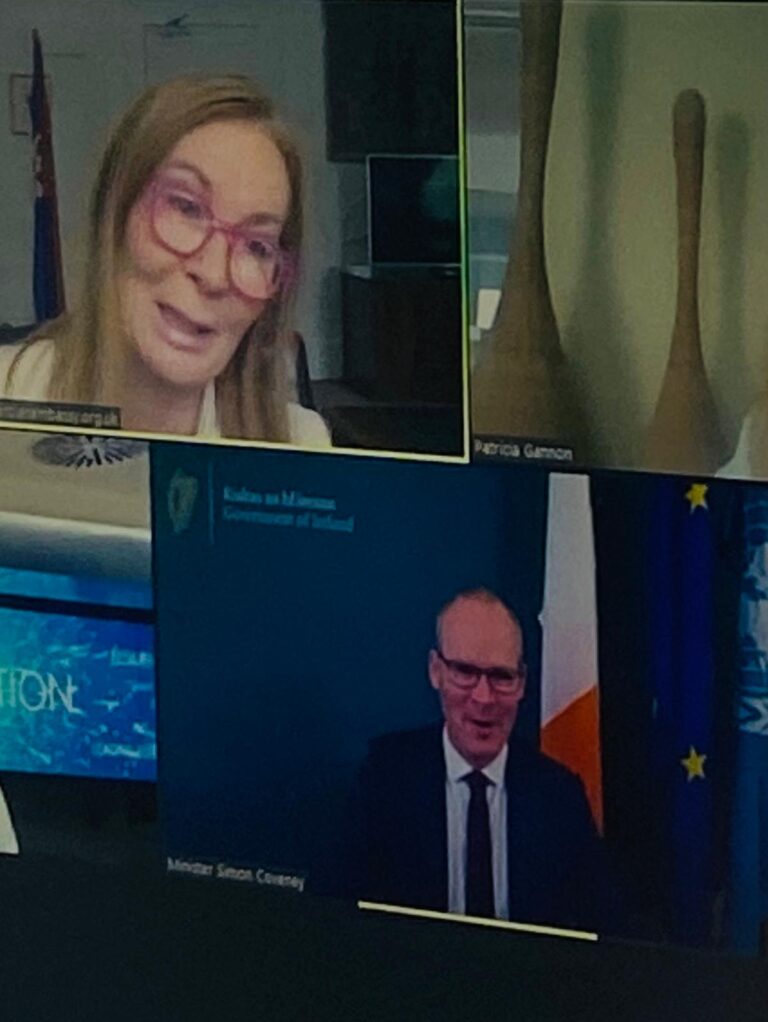 In her presentation, Ambassador Joksimović pointed out the good bilateral relations between the Republic of Serbia and Ireland, which was also stated in the recent conversation between Ministers Selaković and Coveney. She conveyed the expectation that the newly established Chamber of Commerce will significantly contribute to the improvement of trade and investment potentials of the two countries. Ambassador Joksimović underlined the strong commitment of the Republic of Serbia to EU integration, thanking for the continuous support that Ireland provides us in this process. She informed in details about the advantages of doing business in Serbia and the efforts that the Government of the Republic of Serbia is making to make the business environment even more attractive for foreign investments. She pointed out the stable political environment, commitment to reforms in the field of rule of law, successes in the field of vaccination and preservation of the economy during the pandemic, which provides a clear signal to Irish businessmen about the possibilities and advantages of investing in Serbia. As an additional advantage, she singled out the orientation of our economy towards the EU market, but also through free trade agreements concluded with other important partners.

Irish Foreign Minister Simon Coveney welcomed the launch of the Irish-Serbian Chamber of Commerce as a step towards further strengthening friendship and cooperation between the two countries, which was defined as a common goal in a recent conversation with Minister Selaković. He praised the efforts of Ambassador Joksimović, as well as all others who contributed to the creation of the Chamber. He expressed the expectation that the Chamber will contribute to the improvement of trade relations, but also to the strengthening of direct ties between the two nations. He pointed out the importance that Serbia has due to its geographical position and underlined the potential of our country in the sectors of agriculture, communications and information technologies. He noted the impressive results that Serbia has achieved in terms of vaccination, as well as when it comes to reducing the harmful effects of the pandemic on its economy. He especially singled out the solidarity that Serbia has shown towards its neighbours in the context of overcoming the pandemic, reminding that the EU, for its part, has also contributed. He underlined that the Republic of Serbia and the WB region are part of Europe and that as such they should become part of the EU. He described the integration of the WB into the EU as a strategic goal that is in the common interest of both the region and the EU. In that sense, Ireland emphasises the need for new dynamics in the field of EU integration and expects that the new methodology will accelerate Serbia’s European path. He underlined that Serbia can count on all the help of Ireland in that process.

During the discussions, all participants emphasised the positive experiences of Irish companies already operating in Serbia, with an invitation to others to use the potential of doing business on the Serbian market, which is one of the key tasks of the Irish-Serbian Chamber of Commerce.

A welcome from Her Excellency, Amb Aleksandra Joksimovic

The ties between Serbia and Ireland go beyond the framework of diplomatic relations, whose 45th anniversary will be marked in 2022. They are deeper than it seems. The positive perception of Ireland and the Irish, as a friendly people, despite the pronounced geographical distance, is based on historical facts about the presence of Celtic tribes on the territory of today’s Serbia. Our capital, Belgrade, is one of the oldest cities in Europe thanks to the Celts who founded it in the 3rd century BC under the name Singidun (the word dūn (on) means a settlement or fortress and is preserved in the name of London – Lundūn). Serbia does not forget the Irish comrades in the WWI, the heroism of the 10th Irish Division that guarded the retreat of the Serbian army during the withdrawal in 1915, as well as the Irish origin of Flora Sands, the first female officer in the Serbian army.

Hidden but no less important are the threads that connect the cultures of our two countries. Prominent Irish playwright and Nobel laureate George Bernard Shaw (1856-1950) considered Cyrillic the most perfect alphabet in the world. In his will, he bequeathed the then amount of almost 370 thousand pounds to anyone who managed to reform and simplify the English alphabet to be modeled after Vuk’s rule “one letter, one voice”. Serbia is woven into the work of Rebecca West “Black Lamb and the Gray Falcon”, and Ireland in the melodies of the Serbian band Orthodox Celts for almost three decades.

As Ambassador, I shall do my best in enhancing overall bilateral relations between Serbia and Ireland thus bringing two nations as close as possible.

HE Ms Aleksandra Joksimovic, Serbian Ambasador in the UK

Our economic cooperation is modest in scope but of great potential. Therefore, we expect that with its activities, the Irish-Serbian Chamber of Commerce will facilitate communication between business entities in Serbia and Ireland and thus contribute to the recognition of potential and ultimately to a more significant improvement of trade and investment cooperation. At the same time, we strongly welcome the presence of Irish companies in Serbia, but also Serbian ones in Ireland, and we are convinced that, by sharing the positive experiences of our business, they will attract the interest of other companies for our two markets. 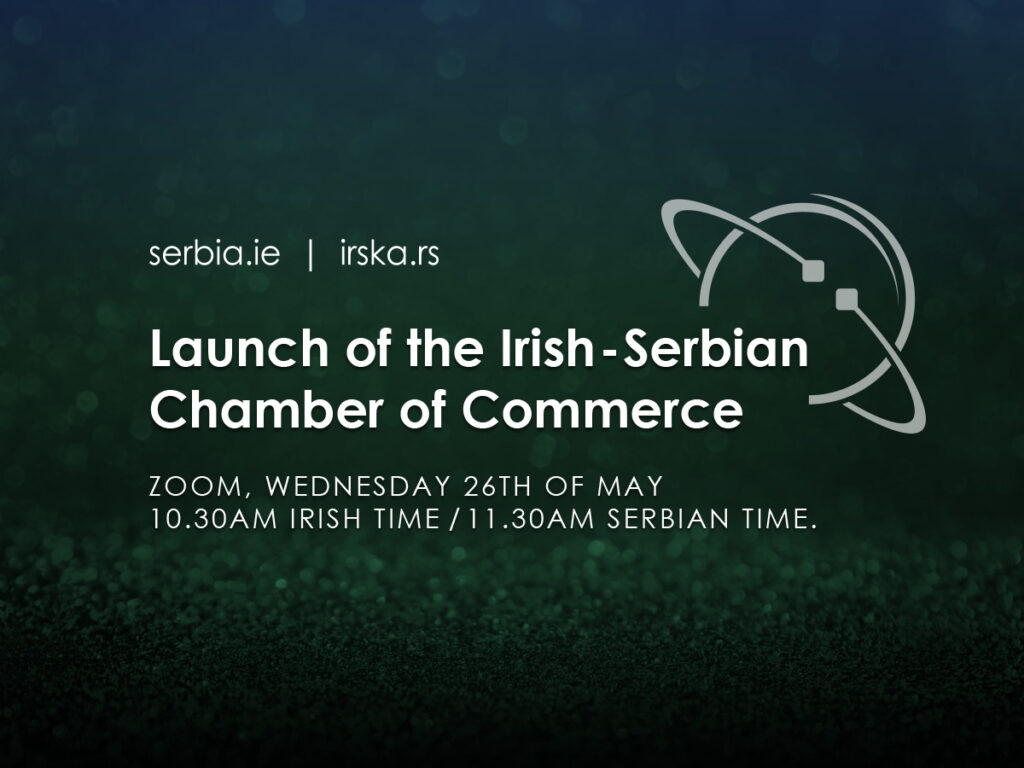 Launch of the Irish Serbian Chamber of Commerce

Launch of the Irish Serbian Chamber of Commerce will take place:
On Zoom
Wednesday 26th of May
10.30am Irish Time/ 11.30am Serbian Time

To ensure your invitation, email me at frank@strategycrowd.com.

Our Guest of Honour will be Minister for Foreign Affairs and Defence Simon Coveney.
Her Excellency, Amb. Aleksandra Joksimović will formally launch the ISCC.

Further details will be posted on the website and on the ISCC Linkedin profile.

The first Lunch with our Ambassador will take place at Trinity College, University of Dublin in September 2021. We will take reservations for this limited event from today.

Our mission is to promote and facilitate trade and investment between Ireland and Serbia, and to represent the views of the business communities in both countries.